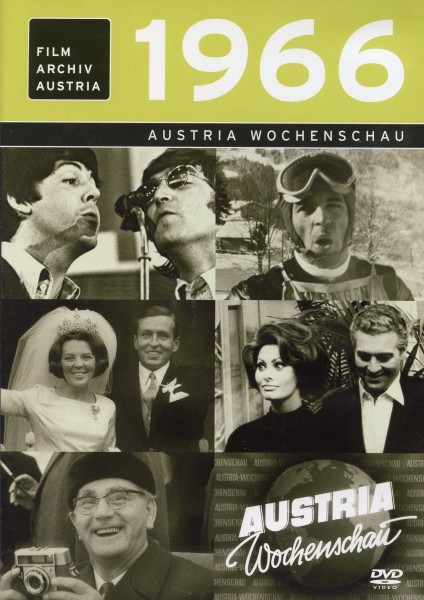 Description
Description
The atmosphere of the past in the fast forward: AUSTRIA NEWSREEL 1966 From the Austria Newsreel... more
Close menu
Product information "Jahres-DVD 1966"

The atmosphere of the past in the fast forward:
AUSTRIA NEWSREEL 1966

From the Austria Newsreel eternalised occurrences, including Charles Chaplins 77. birthday, the wedding of the year Princess Beatrix and Claus von Amsberg, the film wedding from Waltraut Haas and Erwin Strahl, the parliament-elections 1966, the film release of BELAMI 2000 with Peter Alexander, the Beatles on tour as well as other historical records from politic, culture, sport and society.

With the Filmarchiv-Austria-Edition Österreichische Wochenschauen the most important documents of the cinema-reports from the 30ies until the 80ies are published. This DVD contains beside of a summary of the best and most interesting articles of the year 1966 also an extensive bonus-material and several background information to the history of the legendary Austria Newsreel.